Over the last few years, digital banking in Latin America (Latam) has experienced extraordinary growth on the back of changing customer needs, expanding technological penetration and rapidly evolving regulatory standards.

Since 2017, the number of digital banks has more than doubled, reaching 52 independent neobanks in 2021, according to a new report by Swiss digital banking tech provider Banking, Payments: Context (BPC) and Dutch fintech consultancy firm Fincog.

Brazil leads the region both in terms of sector development and consumer adoption. Out of the 52 neobanks identified, 24 players are from Brazil, and out of a pool of 77 million neobank customers in 2021, 63.5 million are located in Brazil, or 82.5% of the region’s total neobank customers, the research found. 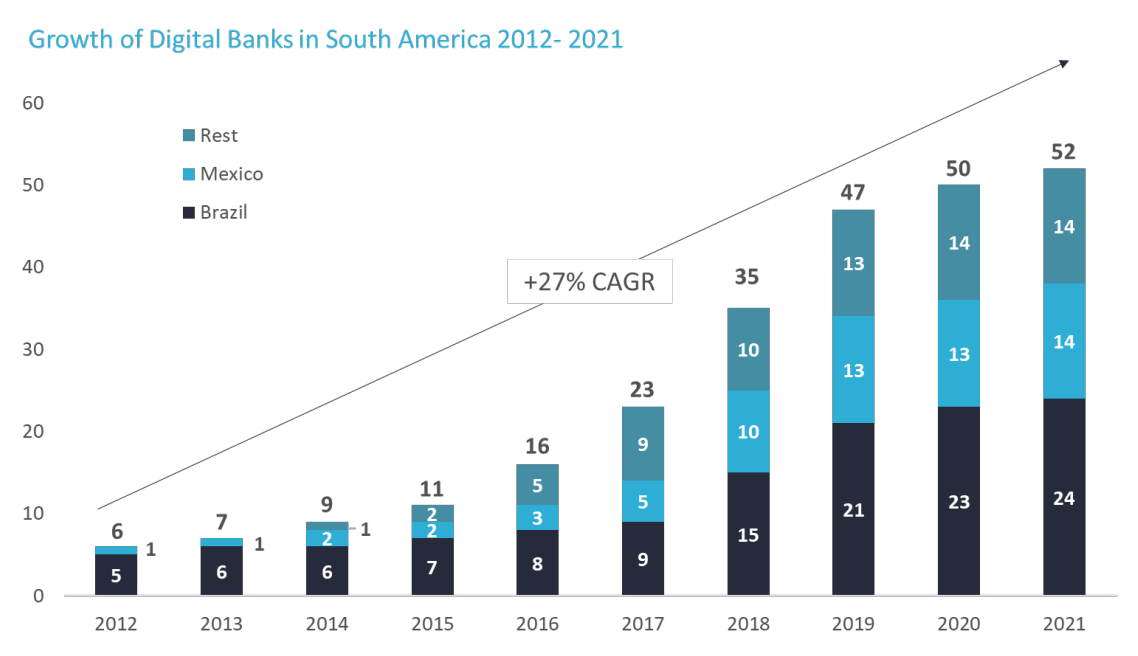 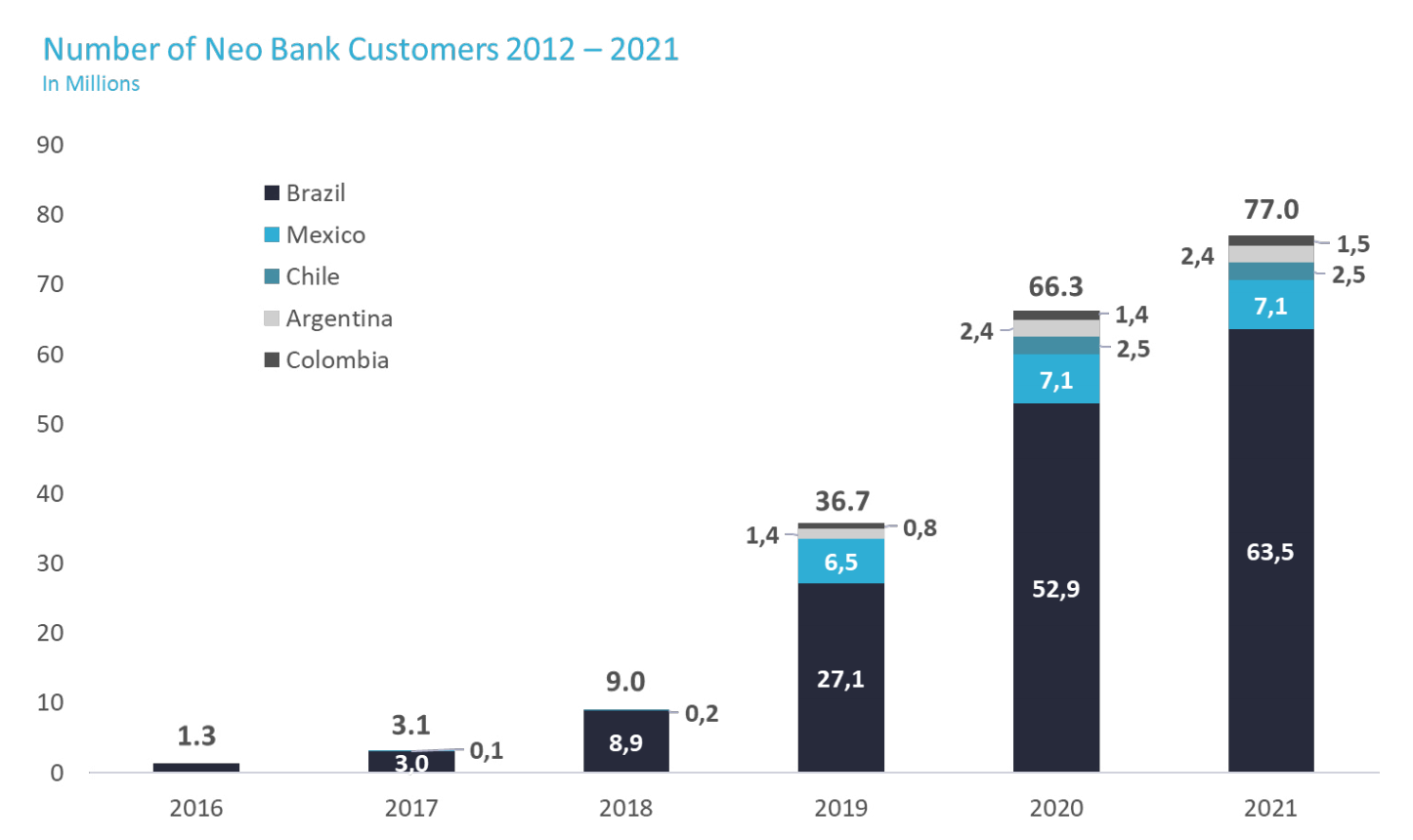 Latam’s digital banking industry is dominated by a handful of players. The research found that the top ten digital banks account for over 90% of all neobank customers in Latam, totaling some 71.2 million. Big players in more developed markets like Brazil and Mexico are now expanding into smaller countries and thus rapidly enlarging their market shares.

Among the key players, Nubank stands out from the crowd. The company has benefited from a first mover advantage into the underserved space, launching in 2014 a no-fee credit card, fully managed by a mobile app.

Today, Nubank serves some 34 million customers, making it the largest digital bank in Latam. It’s also the most valued private company in the region at US$30 billion, according to CB Insights data.

Nubank is reportedly in advanced preparations for a stock market debut in the US which could value the digital bank at more than US$40 billion and could happen by the end of the year or early 2022, sources told Reuters in June 2021.

Besides Nubank, several newer players have also succeeded in capturing significant market share. For example, Neon, from Brazil as well, targets low-income segments and micro-entrepreneurs and has accumulated some 9.4 million customers.

Mexico’s Broxel, which has about six million customers, is a digital payments solutions company that provides a free prepaid debit card to the Hispanic population of the US to facilitate remittances and send or receive money instantaneously across borders. 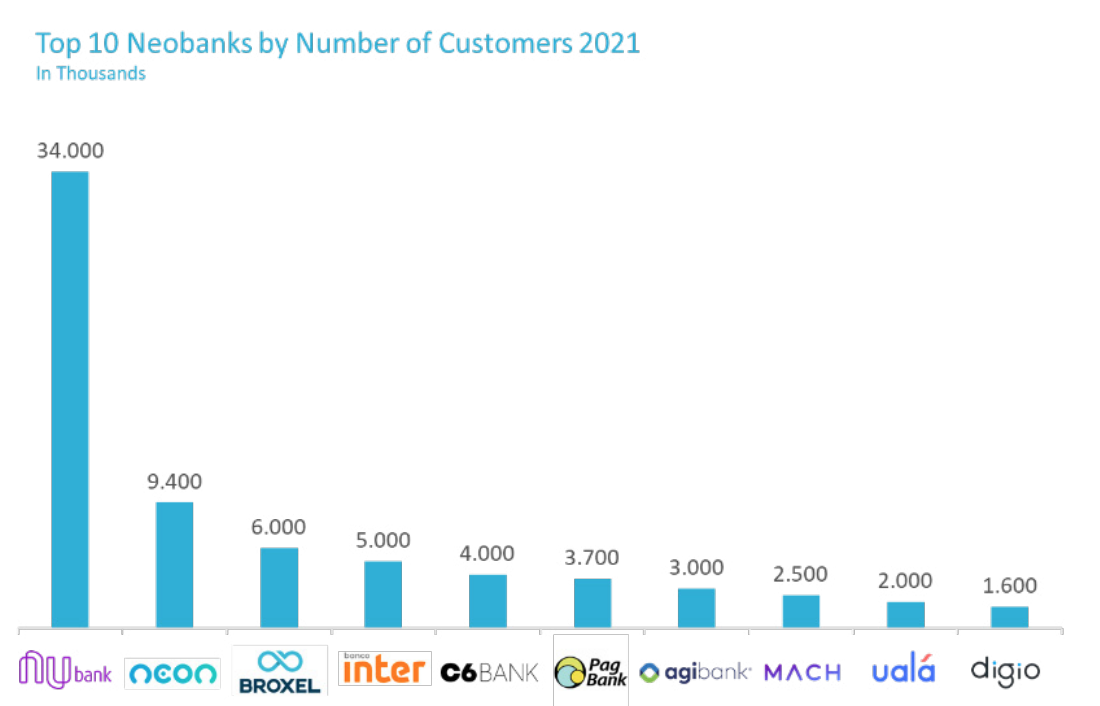 The report also gives mention of smaller, yet noteworthy Latam neobanks like Colombian RappiPay, the first and only super-app in the region that started out as a e-wallet service, Albo, a Mexican startup focusing on introducing the lower and middle-income segments into the formal financial system, Maximo, from Peru, which targets the younger generations with a free digital account and accompanying services, and Cuenca, from Mexico, which provides basic daily banking services to underserved segments.

The growth of neobanking in Latam can be partially attributed to favorable regulatory changes and modernization initiatives by governments themselves, the report notes.

Brazil, for example, kicked off its open banking plan in February 2021, an last year, the central bank launched a national instant payment scheme called Pix. Pix has since been complemented with new features and capabilities such as Pix Cobrança, which allows companies to generate a QR code for a transaction at a future date. Other features planned to be released this year include offline transactions, cash withdrawals, and a “salary account.”

In Mexico, the fintech law was launched in March 2018, offering a framework for key fintech groups, such as crowdfunding platforms and electronic payment providers, while also providing a process for new fintech models.

As of early 2021, 93 fintech companies were in the process of obtaining a so-called Financial Technology Institution (FTI) license, according to data from the Comisión Nacional Bancaria y de Valores (National Banking and Securities Commission), showcasing how the legislation is helping spur a surge in startups.

In Chile, the Financial Market Commission (CMF) published in February 2021 a proposal for the so-called Fintech Law, a new regulation that intends to establish a legal framework for crowdfunding platforms, alternative transaction systems, financial instrument intermediaries, custodians, and credit advisors.

Colombia launched in 2020 the first fintech regulatory sandbox in Latam, a two-year arrangement that allows startups to experiment with business models without meeting all the requirements of a traditional financial institutions.