Though the growth of fintech in Latin America (Latam) started later than in other region, it quickly picked up stream. Today, Latam is experiencing an explosion of fintech activity that’s being fueled by rising demand for online banking tools, encouraging demographics, and a significant underserved population.

Since 2016, more than US$7 billion has been invested into Latam financial services companies, according to Crunchbase data. Funding activity accelerated in 2019, jumping from US$600 million in 2018 to US$1.5 billion. As of June 2, 2021, total investment dollars invested in the sector were already neck-and-neck with last year’s total, indicating that 2021 investment will almost certainly surpass 2020. 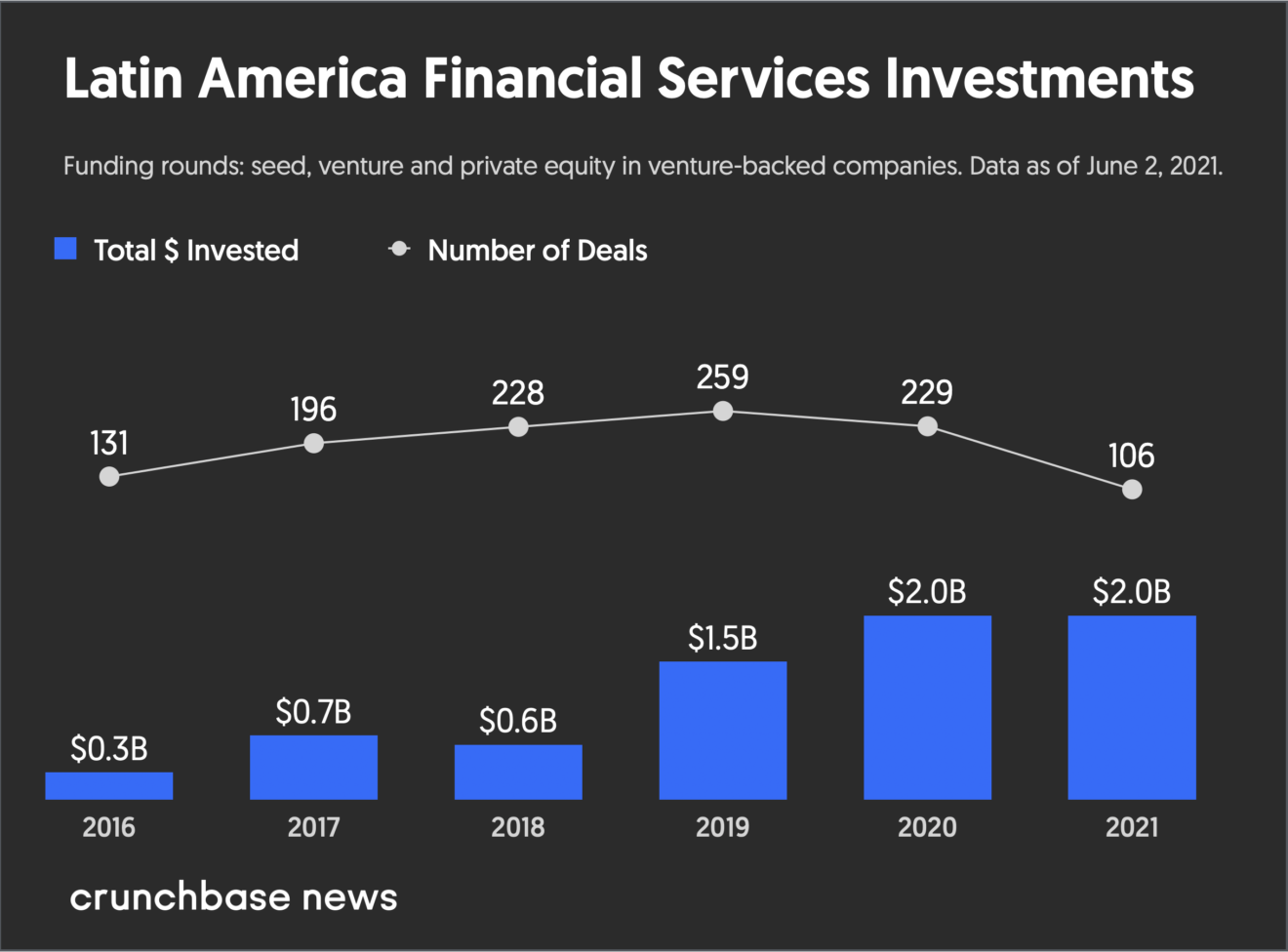 A report released in November 2020 by the Bank for International Settlements provides an overview of the Latam fintech ecosystem, showcasing that across the region, two countries, namely Brazil and Mexico, are dominating the landscape.

Home to more than 750 companies, Brazil is without a doubt the largest fintech market in Latam and arguably the most mature.

It’s the birthplace of some of the region’s biggest and most successful fintech companies, including Nubank, Latam’s largest digital bank serving some 40 million customers and the world’s third most valuable fintech company at US$30 billion, C6 Bank, another major retail digital bank boasting some seven million customers, and Creditas, a consumer lending business worth US$1.75 billion.

Key regulatory changes and infrastructure developments, including the introduction of the regulatory sandbox, open banking regulation and the launch of Pix, Brazil’s instant payment system, have contributed to the rise of the domestic fintech sector, a momentum which industry observers and experts predict will continue this year onwards.

A breakdown of fintech investment in Latam shows that investors are particularly bullish on the prospect of the Brazilian market, with data from Colombian platform Latam Fintech Hub indicating that more than 66% of fintech funding in 2020 went towards Brazilian companies.

Moving forward, more innovation and developments are expected to occur, notably in the areas of insurtech and open banking, predicts Bruno Diniz, managing partner of fintech-focused consultancy Spiralem and one of the most influential fintech experts in Brazil.

2021 should also see a number of large, established Brazilian fintech companies go public. Nubank is preparing for a US listing in the coming months, Reuters reported in April, and Ebanx, a Brazilian paytech unicorn, is looking to raise another round of funding before going public later this year in the US as well as, Bloomberg reported in May.

After Brazil, Mexico is the second largest and second most developed fintech ecosystem in Latam. The country is home to more than 440 fintech startups, and major regulatory developments this year are set to further push that momentum.

In 2018, Mexico became the first jurisdiction in Latam to introduce a specific fintech legal framework through the enactment of the Fintech Law. The law regulates two types of fintechs, notably crowdfunding institutions, and electronic money and payment institutions, but also covers topics including cryptocurrencies, open banking, and a regulatory sandbox.

As of early 2021, 93 fintech companies were in the process of obtaining a so-called Financial Technology Institution (FTI) license, according to data from the Comisión Nacional Bancaria y de Valores (National Banking and Securities Commission), indicating strong interest from the startup community.

Like Brazil and other emerging markets, Mexico boasts a large young and tech-savvy demographic that’s underserved by the traditional banking and financial system and which is eager to embrace innovative, digital-first financial products and services.

These encouraging demographics and favorable regulatory landscape have set a strong foundation for fintech companies to thrive. Today, Mexico is home to two fintech unicorns: Bitso, a cryptocurrency exchange platform worth US$2.2 billion, and Clip, a leading digital payment and commerce platform valued US$2 billion, data from CB Insights show.