What 2021 Holds for Fintechs and Challenger Banks in Mexico

In 2021 we will harvest the seeds of the accelerated adoption and development in technology that 2020 forced upon us. The fintech industry took a leap forward with the user base growing significantly. This will lead to more demands for additional features and pressure for profitability from the market.

We expect to see two trends as the Covid pandemic flattens out in Mexico and ends in the developed world. First, we will see people returning to offices, restaurants, bars, clubs, parties, while traveling and socializing with others. At the same time, the behavior instilled during the pandemic will also lead to the wish to work from home and continuous desire to do so. This goes hand in hand with shopping from home, ordering in, opening bank accounts, access government services and exercise, among the new behaviors that we learned to enjoy and perfected during 2020.

The fintech sector in Mexico grew by 170% in 2020. Its is expected to become more diverse and expand nation-wide.

According to Legal Paradox, the first months of fintech operations in Mexico in 2020 reached levels that were expected to be reached in the next five years! Furthermore, according to Finnovista, the fintech sector grew by an average annual rate of 23% since 2016; however, in 2020 alone we saw an increase of 170%, from 394 fintechs in 2019 to 676 startups! It is important to note that 70% of the fintech companies that operate in Mexico are concentrated in its capital, Mexico City. Now 2021 is the year where the fintech sector is expected to become more diverse, where new innovative companies will support those early adopters, where the ecosystem will expand to other cities and with it make good on its promise to develop and advance the innovation in all of Mexico.

The challenger bank year in Mexico started with the widely seen job advertisement that Revolut was looking for an operations manager in Mexico, and with it, it kind of confirmed its entry into the market. Just a short year after the largest challenger bank by users, NuBank, entered the Mexican market, another fintech behemoth set its eyes on the 130 million market with a “unbanked” population of roughly 40 million! New challenger banks will increase competition as they will need to define their differentiator given that various foreign challenger banks are already operating in the market (Lana, Bnext among others), local players such as Albo, Klar and Flink have announced large funding rounds, other challenger banks are focusing on certain demographics such as Klu, and ride-hailing giants like Uber are launching their own wallet.

NuBank’s business model is based on charging people less for a better service alongside a fast credit check and speeded up process, allowing people to apply for a credit card and credit in no time. With over 40 million users (organic growth with top customer service, product focus and little marketing) the company is not only extremely well funded, but also has a treasure trove of data to improve and enhance their product. Instead of integrating services, they buy companies that provide additional services that are needed, as the case of their acquisition of the trading platform Easynvest shows. The same strategy happened with Starling Bank when they announced its partnership with Nutmeg to integrate trading.

Apart from retail banking the next big market to tap in to is where Revolut, NuBank, Tinkoff and Neon are. It’s in introducing banking products to businesses with a specific focus on startups, entrepreneurs and freelancers.

On the other hand, Revolut and its arrival in Mexico shows the strength of integrations as they have accounting software, crypto trading, and airport lounges among others in their value proposition.

Competition increases as international challenger banks enter the Mexican market backed by experience and customer data, together with a compelling suit of features for customers.

The data and experience that those large foreign players are gathering will have a tremendous impact on the Mexican ecosystem and will force the hand of the local challenger banks. With Revolut entering the market and NuBank growing rapidly, it is expected that we will see integration and partnerships on a much higher level in 2021 in Mexico as well.

It is expected that the local banks in Mexico will follow the worldwide trend of integrating third party fintechs into their platforms as part of their value proposition. The customers that will benefit the most will be those that can use these integrations to better manage their finances, pay bills, trade or receive rewards. Integrating services and creating added value for the customers is much cheaper than building them internally. The large worldwide players have shown the rewards to be reaped in doing so.

But what is the user experience of utilizing these third party integrations actually like? What are some areas of improvement for this integral part of the user journey? Arival Bank has put together an overview of the third party services that the major challenger banks are using: 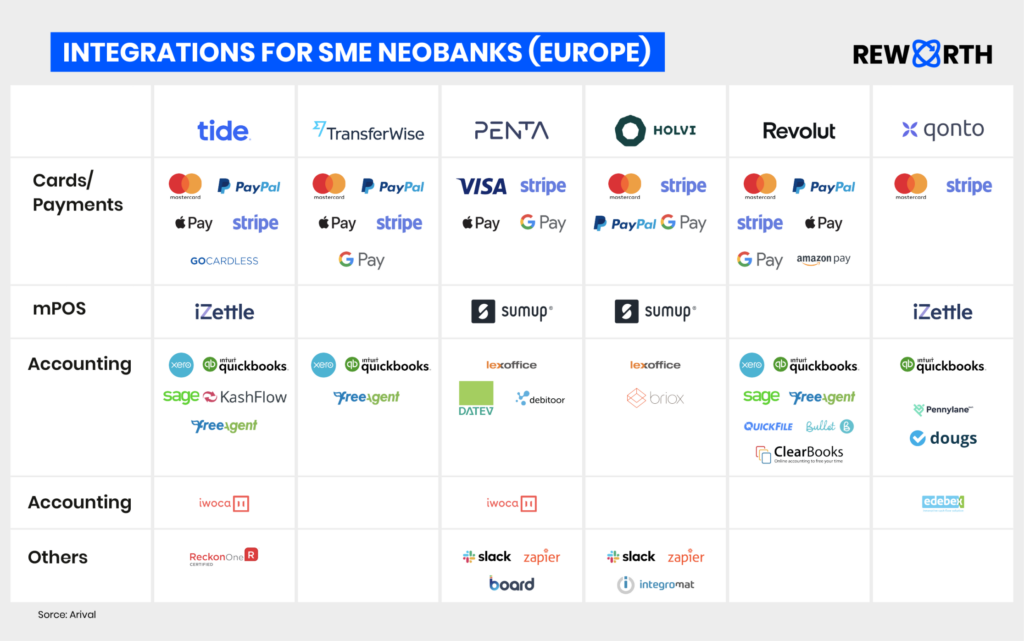 Initially, challenger banks started out and competed only in a specific vertical with the legacy banks, for example, with free wallets and debit cards, but soon realized that this business model based on interchange fees is not sustainable. Others just offered credit or transfer services. This left consumers using various providers, it caused friction and did not really replace their legacy bank ties.

As a result those fintech banks started the rebundling of different fintech’s from various verticals and offering this into a singular unified banking platform. We expect to see the same trend develop in Mexico as it has already started.

New services and integrations in Mexico

With the competition increasing and non-fintech companies arriving to the debit card/ wallet space such as Didi and Uber, while simultaneously international players with a broad offering arrived in Mexico, challenger banks started to add services and integrations to diversify.

Demand for more features and additional banking services will drive demand for integrations and partnerships among challenger banks in Mexico.

Oyster was the first challenger bank for PyMES in Mexico and was able to grow rapidly. Opening new verticals, Albo launched Albo Empresa to tap into the SME business space. Tribal, on the other hand, offers businesses a corporate card built for startups and supplies them with modern financial tools especially designed for startups. With the competition in that space growing, those local players need to add additional value to their offering to be able to compete with the new players such as NuBank and future competitor Revolut Business in that sector.

Following the footsteps of NuBank and Sterling Bank, Flink started a trading platform to open new revenue channels and diversify its business dealings. This approach looks very promising with an untapped market of potential investors that want to start trading. The success of eToro and RobinHood show democratizing finance can be very profitable.

Klar started as a credit-offering challenger bank in an almost untapped market back then. The value proposition of a credit and/or credit card with a fast approval in a market where most people are unable to meet the requirements for a credit card was a massive game changer. Stori Card and Vexi are other strong contenders in the Mexican credit card market and are set to continue banking the unbanked. In 2020, we have seen more players coming into this space as NuBank is bringing an experienced team and lots of data to conquer the Mexican market.

The crypto rally is back and with it, challenger banks that have that integration are very interesting to watch. Klu is a product by Bitrus, which itself is an innovative crypto trading exchange. The Klu app allows users to manage and send money and even pay for different services or simply use their card. Taurus expanded from being a crypto exchange to a challenger bank where users now can also take full advantage of their services. It is important to mention here the fully regulated daughter company of Bitso, NVIO, that is set to start in 2021 and will compete with the new arrival of Revolut.

For all the drivers, couriers and other gig economy workers, challenger banks that are focused on that segment entered the Mexican market. First it was Lana from Spain, then in 2020 Uala arrived from Argentina. What will be their added value if RappiPay focuses even more on their own workers, or with Didi and Uber having launched their own wallets? Time will tell.

From offering a full marketplace like Bnext, another efficient way to become more attractive to the most important stakeholder – the consumer – is the interesting collaboration that RappiPay did: an alliance with Banorte to offer an interesting cashback for their clients. This is another way to increase revenues and brand loyalty to make a difference to their customers. Cashback became somehow the new “point” system in the USA, with massive success among Millennials and Generation Z consumers due to its straightforwardness and instant gratification. In Mexico, Klar was the first that launched their own cashback program to build brand loyalty and enhance customer happiness. Oyster has followed the trend by having a partnership with TDU, the issue here is that the solution is not integrated and hence not seamless for the customers. We expect to see more challenger banks launching their reward systems and lets see who will be the first one to combine cashback and crypto.

Where is the integration in Mexico?

While the challenger bank ecosystem is still growing and its players are fighting for market share and recognition, only a few third party integrations have been announced so far, and instead a lot is being built internally. With heightened competition, it is expected that the banks will follow the worldwide trend and start integrating international payment providers, accounting software, credit platforms, personal finance management tools and reward platforms to increase the attractiveness of their product, while not investing the full development costs.

This article first appeared on Linkedin

Current Raises US$220 Million Funding, Triples Valuation to US$2.2 Billion