The open banking movement has reached Latin America (LatAm) on the back of a booming fintech sector.

The growth of fintech in LatAm started later than in other regions but quickly picked up steam. From 2017 to 2019, fintech investment in LatAm grew more than 100% while the number of deals increased by 28%, according to a November 2020 paper by the Bank for International Settlements (BIS). 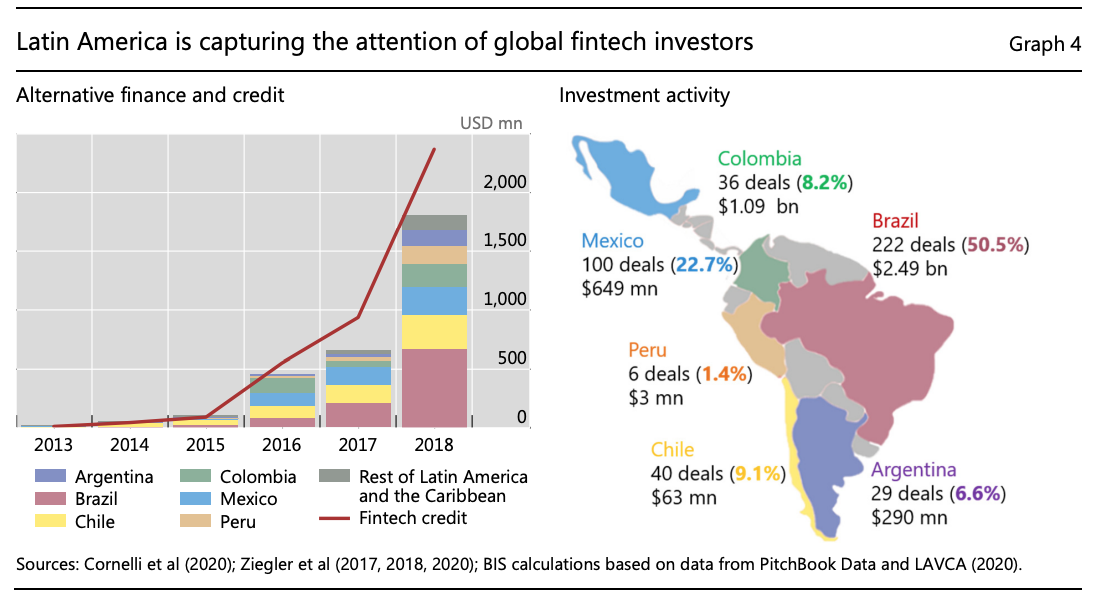 With fintech on the rise in the region, governments are introducing new regulations to implement open banking.

On the regulatory level, the degree of open banking development varies significantly among countries, with Mexico and Brazil, the two largest fintech hubs in LatAm, currently taking the lead. Meanwhile, Chile and Colombia are working on an open banking framework, while nations including Peru, Argentina and Bolivia are lagging behind without a clear direction stated by their local authorities.

In 2018, Mexico released the Fintech Law, which addresses a broad framework for the sector, but the first set of secondary laws meant to establish the next steps for open banking implementation in the country were released by the central bank in March 2018 and by the National Banking and Securities Commission in June 2020.

The law requires all the different actors in the financial ecosystem to offer application programming interfaces (APIs) in order to share information with each other. Financial institutions are obliged to share open financial data, aggregated data and transactional data, provided that the user agrees to give access to them. This affects a total of around 2,200 institutions, from banks to various financial companies.

Since the Fintech Law passed in 2018, deployment of open banking has been somewhat slow. Today, open banking in Mexico has only been focusing on non-confidential financial data, such as information on banks’ products and services, and ATM locations.

Aggregated data by the institutions, including statistical information about both personal and institutional operations, and transactional data of the clients will be addressed in 2021.

In Brazil, the central bank launched Phase 1 of open banking in February 2021 after rolling out a new regulation back in May 2020 on customer data sharing and requiring both traditional banks and fintechs to comply with it.

The first phase aims for banks to deliver the foundations for the market to create business models and services. In this initial phase, there’s no sharing of data on customer registration or transactional activity. Instead, companies participating in the open banking ecosystem are required to open data on their service channels and the characteristics of banking products and services through open APIs.

The second phase, which will starts in July 2021, will allow participating institutions regulated, authorized and supervised by the central bank to start sharing customer information with their consent, including registration data, account transactions, card information and credit operations.

The third phase, scheduled for August 2021, will focus on transactional information. In this phase, consumers will begin to have access to personalized services such as payments and credit offers through financial institutions’ digital channels.

Finally, the fourth and last phase, forecast for December 2021, will allow for the sharing of additional customer data related insurance, pension plans, investments and salary accounts, among others.

Chile: open banking and fintech law in the works

In Chile, an open banking and fintech law is in the works and is expected to be ready in one or two years.

The legal project follows Chile’s Financial Portability Law, which came into force in September 2020 and which makes it easier for individuals, entrepreneurs, and small businesses to switch between financial service providers, an initial step on the path to establishing an open banking framework.

Similarly, Colombia is working on an open banking regulation expected to be ready in 2022.

The government agency in charge of drafting the law, the Regulatory Projection and Financial Regulation Studies Unit (URF), said the long-term goal is to have an open architecture for all financial products and services.

The URF is planning a series of public-private sector discussions this year to advance the regulatory framework with the financial industry. In the long term, the agency aims to have open architecture for all financial products and services.

Plaid Raises US$ 425 Million, Pushing Its Valuation to US$ 13.5 Billion

Cloud and Digital Wallets to Drive Payments in Latin America, Despite Pandemic