The fintech ecosystem in Latin America (LatAm) has risen quickly over the past couple of years with sustained growth observed in all segments and in the number of active fintech companies, a new report from the Inter-American Development Bank (IDB) and Finnovista shows. But across all major categories, it is digital banking, technology/IT and infrastructure, as well as insurtech that have witnessed the strongest growth.

As of the end of 2021, the LatAm and Caribbean (LAC) region was home to 2,482 fintech companies. The region’s largest economies, Brazil and Mexico, accounted for more than half of the total number of fintech companies, hosting 771 and 512 fintech ventures, respectively. These two countries, combined with the three other top fintech markets in the region, namely Colombia, Argentina and Chile, made up 81% of all LAC fintech startups.

Looking at the growth trajectory of the fintech industry over the past years, IDB notes that the number of fintech companies in the region more than doubled between 2017 and 2021, showing the dynamism and expansion that the industry has been experiencing these past few years. On average, the number of fintech companies in LAC’s top five biggest fintech markets has grown at 34% per year between 2017 and 2021. 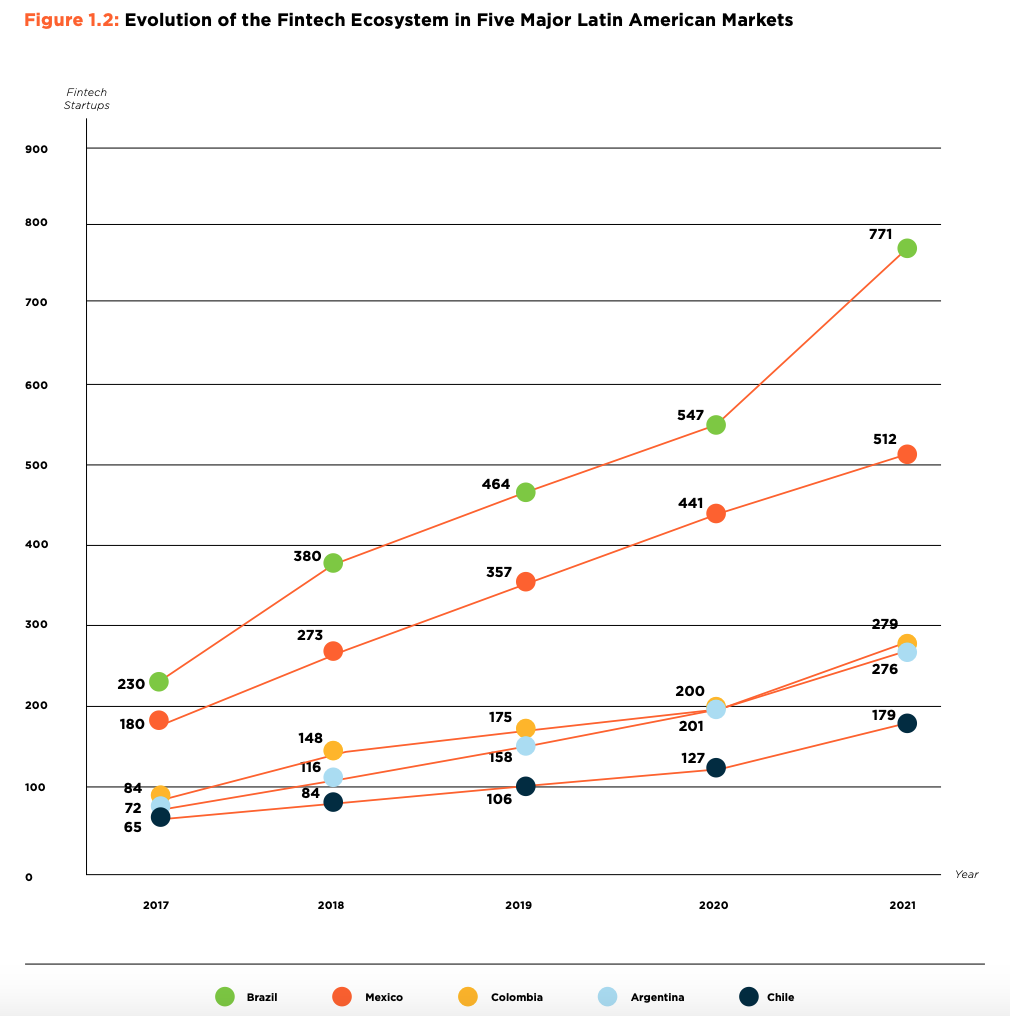 Evolution of the fintech ecosystem in five major Latin American markets, Source: Fintech in Latin America and the Caribbean: A Consolidated Ecosystem for Recovery, Inter-American Development Bank (IDB) and Finnovista, 2022

A deep dive into key fintech subsectors shows that payments and remittances have remained the region’s biggest fintech segment, representing now 25% of all fintech companies in LAC or 604 ventures. The payments and remittances category is followed by lending (19%), business technology solutions for financial institutions (15%) and enterprise financial management (11%). 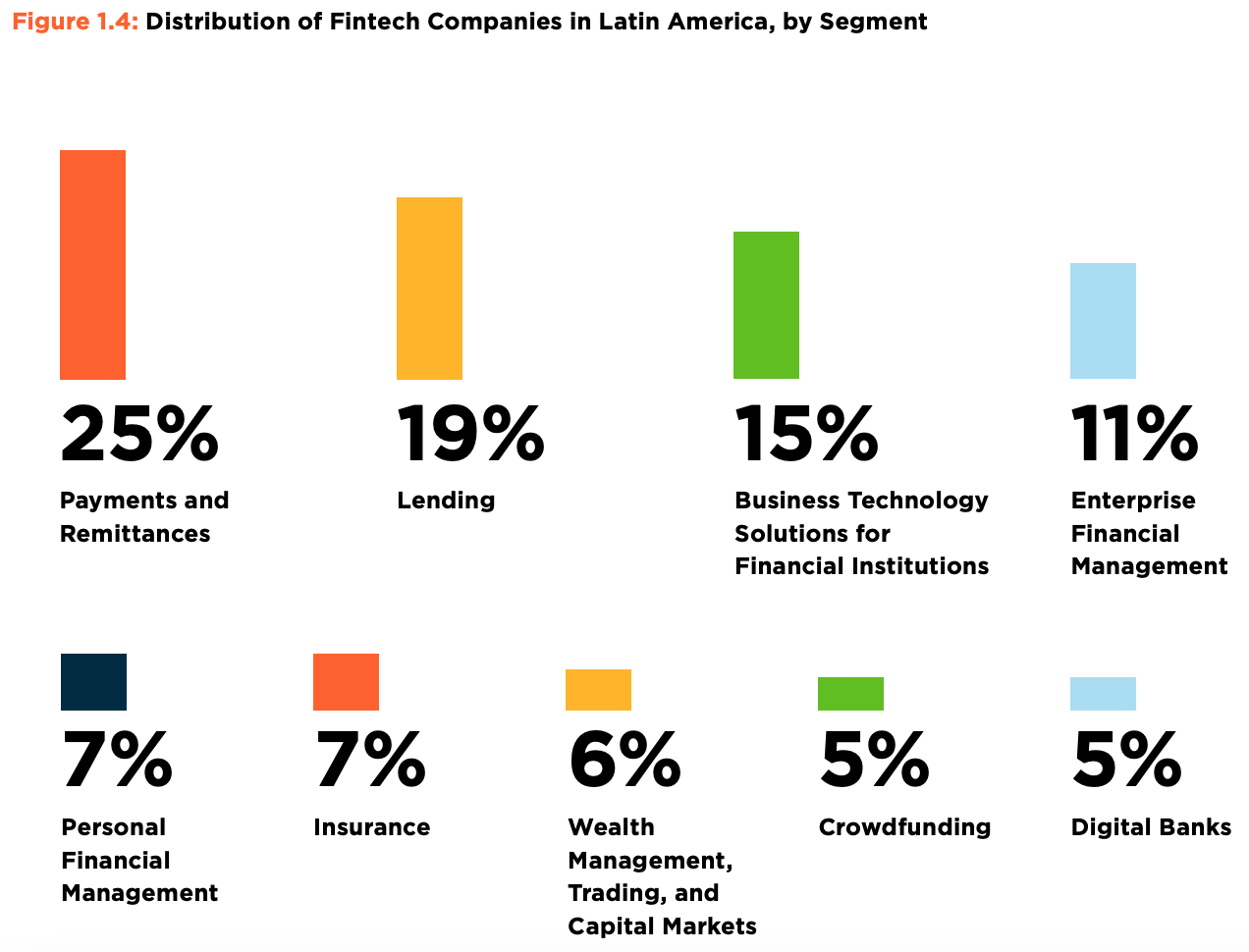 Distribution of fintech companies in Latin America, by segment, Source: Fintech in Latin America and the Caribbean: A Consolidated Ecosystem for Recovery, Inter-American Development Bank (IDB) and Finnovista, 2022

Digital banking has been one of the most talked about fintech trends in LatAm amid booming adoption in markets including Brazil and Mexico, and soaring funding activity.

Brazil’s Nubank has amassed more than 48 million customers across LatAm and is today the country’s biggest digital banking company. Last year, it became LatAm’s most valuable listed bank after raising US$2.6 billion in an initial public offering (IPO) that gave it a market value above US$40 billion.

Banco Inter, another Brazilian digital bank, closed 2021 with a year-on-year (YoY) customer growth of 93% to reach 16.3 million users. This helped boost revenue by 131% compared to the previous years as well as its net profit by 1,307%. The company, which provides both financial and non-financial services to its customers, has been working on an US expansion, acquiring Los Angeles-based startup Usend in January 2022 and officially launching its US operation in June 2022.

The rise of digital banking in LatAm has been enabled by strong venture capital (VC) activity supporting the sector. An analysis conducted as part of the IDB and Finnovista report found that digital banking companies in LatAm have raised more funds on average than the rest of the fintech ventures in different segments.

Of the digital banking startups surveyed for the report, 68% indicated having received financing. Of these, 36% said they’ve raised more than US$1 million, a proportion that’s much higher than the average reported for the entire fintech sector of 27%.

After digital banking, business technology solutions for financial institutions recorded the second strongest growth, rising at an average annual rate of 49% between 2017 and 2021. The report highlights a correlation between the rise of digital banking in LatAm and growing demand coming from financial institutions for digital platforms and tech solutions. It notes that within the business technology segment, digital banking platforms and services are the most represented category, implying that growth in the neobanking space has pushed incumbents to ramp up their digital transformation and turn to tech providers for their digital needs.

The insurtech segment also saw significant development, growing at an average annual rate of 46%. This segment already witnessed a natural growth trend before the pandemic, but COVID-19 has accelerated the rise of the sector, the report notes.

Insurtech is a promising space in LAC, the report says, given the low penetration of insurance products that stood at an average of 3.1% of premiums/GDP in 2020 compared to the global average penetration ratio of 7.2% in 2019. 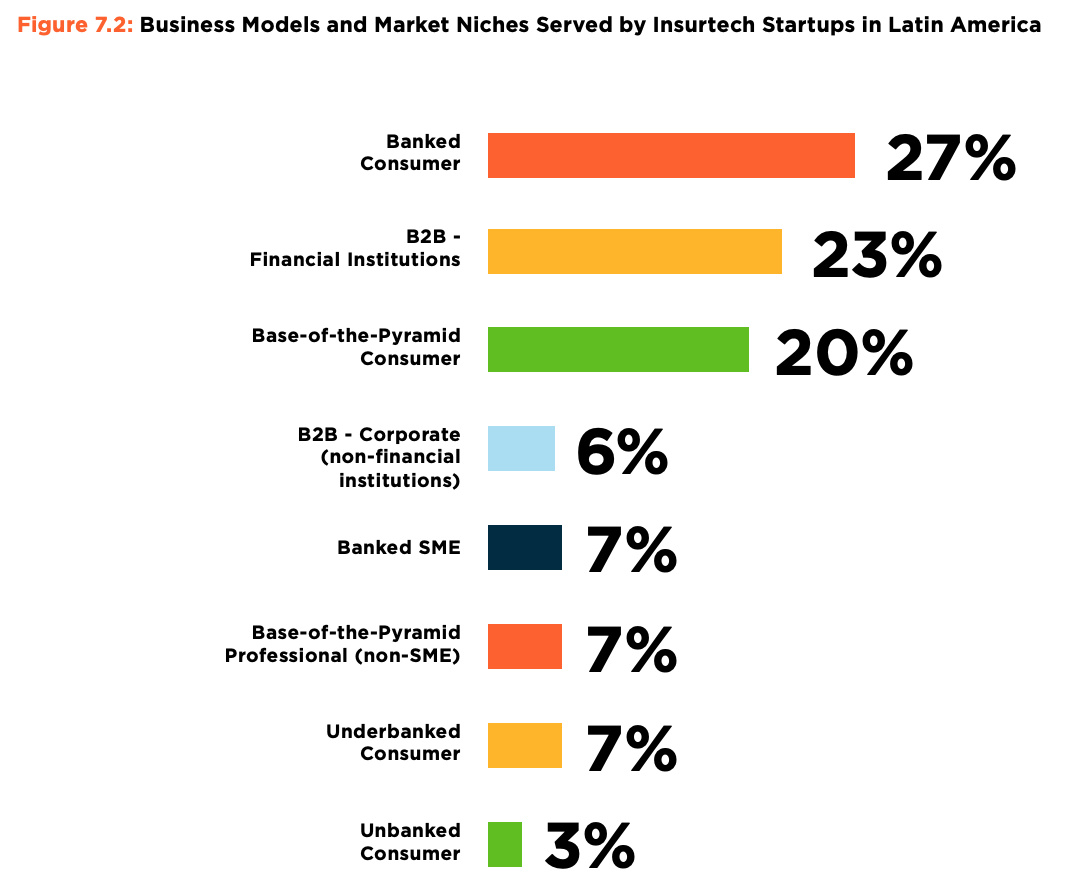