El Salvador’s President Nayib Bukele announced plans to build a world’s first “Bitcoin City” situated near a volcano that will be funded by the cryptocurrency according to Reuters.

Bukele seems to be doubling down on his crypto push as El Salvador had only recently emerged as the first country to use Bitcoin as legal tender.

The Bitcoin city’s construction will begin in 2022 and it will be built in the south-eastern region of La Unión where it would leverage Conchagua volcano’s geothermal energy to power the crypto’s mining.

The city will reportedly be circular featuring a central plaza that would look like a bitcoin symbol aerially along with an airport, residential and commercial areas.

The president added that the city will not levy any taxes except for value added tax (VAT) where half of it will be used to fund the bonds issued to build the city. Meanwhile, the other half will be utilised to pay for other requires services.

He estimates that the public infrastructure would cost up to 300,000 bitcoins.

Bukele also announced a partnership with digital assets infrastructure company Blockstream to raise US$1 billion through a “Bitcoin Bond”. Half of the funds will be used to purchase bitcoin while the other half will be channeled into energy and bitcoin mining infrastructure.

In order to move things along, Bukele said that El Salvador is developing a securities law and has earmarked the first license to operate an exchange for Hong Kong-based crypto exchange Bitfinex. 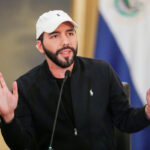 “Invest here and make all the money you want. This is a fully ecological city that works and is energized by a volcano,”