Study: Call for International Cooperation in Fight Against Crypto-Related Crime

The global nature of the blockchain ecosystem is adding a layer of complexity in the fight against crypto-related crimes. Against this backdrop, the US Department of Justice (DOJ) is calling for international, federal, state and public-private cooperation to improve the regulation and policing of cryptocurrency activity.

On October 8, 2020, the US Attorney General’s Cyber-Digital Task Force released a new report addressing the emerging threats and enforcement challenges associated with cryptocurrencies.

In the Cryptocurrency Enforcement Framework, the task force says that while it recognizes the “breathtaking possibilities [of distributed ledger technology] for human flourishing,” citing areas including supply chain transparency and central bank digital currency (CBDC), the technology also “plays a role in many of the most significant criminal and national security threats our nation faces.”

While crime has been expanding beyond national borders for years, blockchain and cryptocurrencies have taken this globalization to another level, allowing parties to conduct transactions and transfers between continents in a matter of minutes. In addition to this, some of the largest crypto exchanges are based overseas and conduct very limited customer due diligence. Finally, the emergence decentralized platforms, peer-to-peer exchangers, and anonymity-enhanced cryptocurrencies is further obscuring financial transactions.

In light of this, the DOJ says that “for cryptocurrency to realize its truly transformative potential,” national, federal and state governments, as well as stakeholders, must take coordinated active to mitigate harmful uses of the technology.

The DOJ “[recognizes] the importance of working with interagency and international partners to enhance an already vigorous enforcement plan, regulatory scheme, and policy framework to thwart the opportunities created by cryptocurrency for criminals, terrorists, and other bad actors,” the report says.

“The department is committed to strengthening its key partnerships by promoting law enforcement awareness and expertise; by fostering cooperation with state authorities; by enhancing international cooperation; by promoting comprehensive, consistent international regulation; and by conducting private sector education and outreach.”

The framework identifies three main types of criminal behavior that exploit the unique features of cryptocurrencies and the cryptocurrency marketplace.

To begin with, it cites the use of cryptocurrencies to engage in financial transactions associated with the commission of crimes, such as buying and selling drugs or weapons on the dark web, engaging in extortion schemes, leasing servers to commit cybercrimes, or soliciting funds to support terrorist activity. 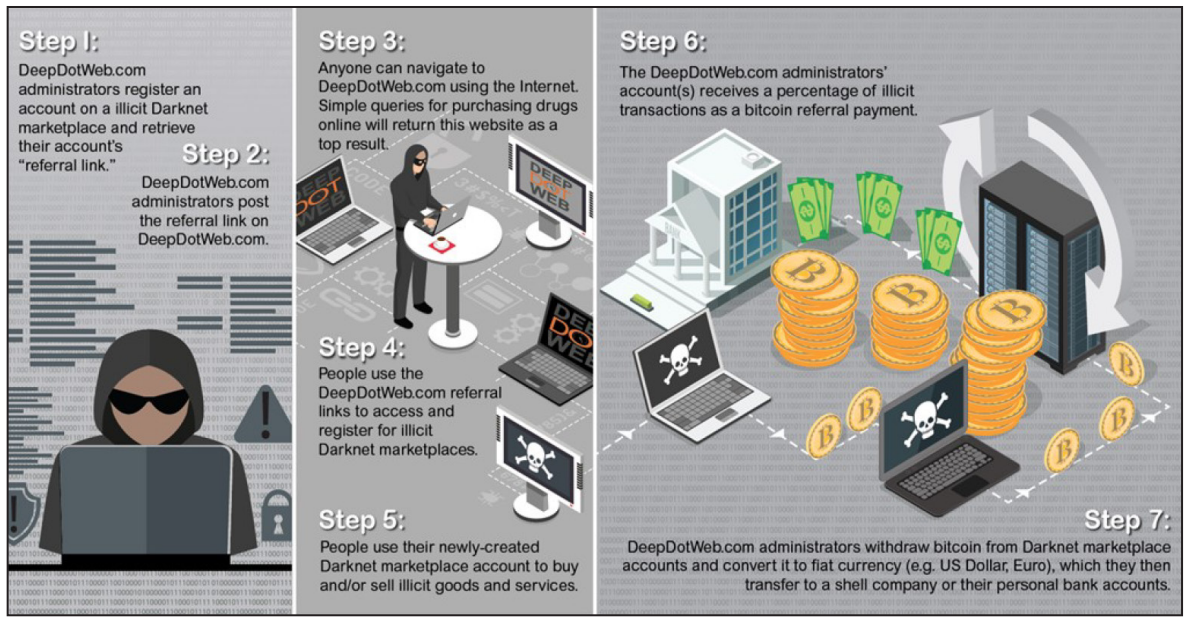 Most recently, the FBI observed an increase in cryptocurrency fraud schemes due to COVID-19. Fraudsters have been leveraging the fear and uncertainty cause by the pandemic to carry out scams in new ways, such as threatening to infect victims and their families with COVID-19 unless they send payment in bitcoin.

The second category involves the use of cryptocurrencies to engage in money laundering or shield otherwise legitimate activity from tax, reporting, or other legal requirements.

Infamous cryptocurrency trading platform BTC-e was one of the world’s major bitcoin exchanges before the US government seized the website and arrested staff members in 2017. According to the indictment, BTC-e facilitated transactions for cybercriminals worldwide and received criminal proceeds from numerous computer intrusions and hacking incidents, ransomware scams, identity theft schemes, corrupt public officials, and narcotics distribution rings.

Finally, the third category relates to crimes implicating the cryptocurrency marketplace itself, such as stealing cryptocurrency from exchanges through hacking or using the promise of cryptocurrency to defraud unwitting investors.

In 2019, over US$4.5 billion of cryptocurrency was lost to theft or fraud, more than doubling the losses from the prior year, according to crypto intelligence company CipherTrace. The first five months of 2020 saw crypto thefts, hacks, and frauds totaling US$1.4 billion, suggesting that 2020 could see the second-highest value in crypto crimes ever recorded.

Established in early 2018, the Cyber-Digital Task Force consists of officials in the DOJ’s Criminal Division, National Security Division, Office of Legal Policy, and the FBI. It was formed to study how the DOJ responds to cyber threats and make recommendations to curb those threats.