The stablecoin market is obviously gaining popularity, growing from 1% of all crypto in 2018 to almost 3% today. Global stablecoin trading volume increased from $12.5 billion in 2017 to $82 billion in 2018, according to Chainalysis. Furthermore, the 24-hour trading volume for Tether, one of the most popular stablecoins, recently exceeded Bitcoin’s. 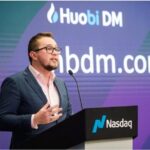 But it’s a slow and complex process for large centralized exchanges to adopt this kind of currency. They already have the option to use Tether, and in the absence of user demand, they see no reason to list alternatives.

Today we’re discussing these issues and trends with Josh Goodbody, Chief Counsel for Equilibrium, the framework behind the EOSDT stablecoin, and the Head of Europe and the Americas for Huobi Global’s sales and institutional business.

Why do you believe that large EOS holders would be interested in an EOS-based stablecoin when EOS’s volatility is a source of their income?

Some exchanges obviously hold their users’ EOS, and they effectively become large block producers by virtue of holding lots of aggregated EOS on behalf of their clients. If you’re inherently bullish on EOS and believe there will be positive price movement in the future, you want to retain your exposure to that positive price movement. But you might also want to find a way to use your existing EOS holdings to create value without necessarily spending it.

Equilibrium lets crypto users — especially those with large EOS holdings — stake that EOS in Equilibrium’s smart contract and create a stable source of volatility-neutral assets. Practically, this enables them to carry on with business while hedging market risk. If they’re very bullish, it might allow them to purchase more EOS cryptocurrency, but it still preserves their individual holding — they don’t have to cash out to create another crypto position. There are a number of dynamics within that that make large EOS holders very receptive candidates to creating EOSDT stablecoins.

Equilibrium also recently merged the interests of EOS miners and EOS holders via integration with the REX project, an extremely popular market due to its passive income stream. As a result, Equilibrium can now offer an above-industry-rate return to users who choose to leverage their EOS holdings by generating EOSDT. They basically lend it to the system to earn fees on those deposits as other users borrow EOS in the form of CPU/NET resources. This opportunity is combined with the ability to generate EOSDT stablecoins at just 1% APR.

Some crypto-markets proudly wear their crypto-anarchy colors, but the biggest stable coin in the world is pegged to the US dollar. Doesn’t that prove that the US dominates the crypto-economy, just as it dominates all other aspects of economic life around the world? What kind of future do other stablecoins have if this is the reality?

The reality here is that the US dollar, and any activity related to it, has to inherently use the US dollar financial infrastructure. I’m of course referring to entire financial infrastructure that underpins the global economy. USD is a reserve currency for many countries, and it’s an established universal currency that many jurisdictions use for international trade. This is simply because the dollar is more stable than most other assets.

Tether (USDT) is of course pegged to the dollar but, when used as a method of exchange, it doesn’t inherently involve US Dollar banking infrastructure. You can use Tether outside the confines of the traditional banking. It’s unfair to attribute this to purported US economic dominance — it just makes sense that the most widely used asset in the stablecoin space would happen to be pegged to the dollar. I don’t think this proves the US is dominating the crypto economy. Tether merely reflects the reality that the global economy still sees the value and stability of the US dollar as a sensible source of value for transactions.

We have seen stablecoins pegged to other fiat currencies, and I think we’re seeing a slow but steady increase in diversification. Of course, there will be a question as to what happens when people wish to cash out of a stablecoin holding, but this practical concern doesn’t detract from the utility of these assets as a means of transferring value.

Do you think that consumers have enough influence to drive mass adoption of stablecoins by major exchanges? What other cryptocurrency-using demographics can influence exchanges’ decision-making, and what are you doing to target these groups?

User adoption is a key part of the strategy. Although crypto exchanges are receptive to stablecoins (and we’ve seen a large trend of adoption by exchanges) I think exchanges are identifying that there is value for themselves and their users alike by increasing the selection of stable assets that they support. Users can vote with their feet — if they can’t get what they’re looking for from one source, they’ll go to another. Smart exchanges understand that the user always comes first.

As this mantra applies to Equilibrium, we are creating a framework that’s efficient and user-friendly from day one. It will be multi-asset compatible — the first build supports EOS itself as the underlying collateral for the Equilibrium framework, but this framework was always envisioned to be blockchain-interoperable. That’s to ensure we’re accessible to the widest array of communities using crypto-assets. We are going to start talking about the fact that Equilibrium is decentralized, as this is viewed by our users as massively positive. Furthermore, we’ve had feedback that the interest rate applicable to EOSDT production is extremely favorable. Everything we’re doing is to put the users first.

It seems impossible to discuss regulation until we clearly nail down the characteristics of stablecoins. Do you agree? If not, what do you perceive as the main issue in stablecoin regulation?

There has been a lot of work done by bodies like Global Digital Finance (GDF) to help define and create a common understanding for different asset types, and stablecoins are just one asset class that deserves such attention. These efforts are undoubtedly helpful, but unfortunately it ultimately comes down to the applicable law of individual jurisdictions — each has its own (often diverging) approach to stablecoins, which makes the stablecoin market rather challenging.

So what is a stablecoin? By default, it’s an asset that’s shielded from market volatility. Its day-to-day value should be as stable as possible. A great way to accomplish this is to peg it to a stable fiat currency like the dollar or the euro. Some are fiat-backed, some are crypto-backed, and others are algorithmically backed. Each asset requires a case-by-case analysis to see where they match up with existing regulatory frameworks.

The first iteration of stablecoins were very much fiat-backed. One dollar is one dollar of value out. That’s akin in most jurisdictions to the issuance of electronic money. I think that’s unfairly characterized a lot of other stablecoins as electronic money — in other words, as regulated instruments — when in many other cases they can, and should be, treated as crypto assets.

Half of the trading volume on most crypto-exchanges comes from Bitcoin. Tether is in a class of its own when it comes to stablecoins — it has a $4 billion market cap and $17 billion in daily trading volume, but this is where the similarities end. Bitcoin reflects an unregulated, global economy while USDT reflects USD as a global currency. So which economy are the rest of stablecoins pegged to? Which approach is more viable?

Large stablecoins like Tether are very much not pegged to an economy, but to an economic value. That’s an important differentiation to make here. The fact that an asset has been associated with a fiat currency is very different from it being attached to a jurisdiction’s economic performance. In this sense, I think the best way to look at stablecoins are that they have an inherent utility — they’re a volatility-neutral source of value. This is extremely important when it comes to cashing out of crypto positions, hedging activity, and day-to-day transactions via blockchain networks. They’re just as important as the volatile crypto assets they trade against.

Stablecoins are a product of need — volatility-neutral assets are to be used in tandem with assets that are inherently volatile. The idea that we can eliminate fiat is perhaps wildly overambitious, and it doesn’t reflect the reality of the world economy. But stablecoins hold an increasingly important place in the world economy because the exchange environment wouldn’t work without these assets shielding their users from everyday volatility.