Adoption of open banking is catching in the US on the back of rising customer demand and competitive pressures, according to a new report by Financial Technology (FT) Partners.

In a paper titled Open Banking: Rearchitecting the Financial Landscape, the fintech-focused investment bank gives an overview of the open banking landscape in the US and introduces some of the companies leading the space.

According to the report, US consumers are becoming increasingly awareness and receptive of open banking with younger generations in particular being the most interested in the potential for more flexible and transparent financial offerings.

Higher-income consumers tend to favor open banking as well. The FT Partners report cites a Deloitte study conducted in 2019 which found that consumers with more than US$250,000 in annual income were the most receptive to sharing their financial data and to open banking in general. 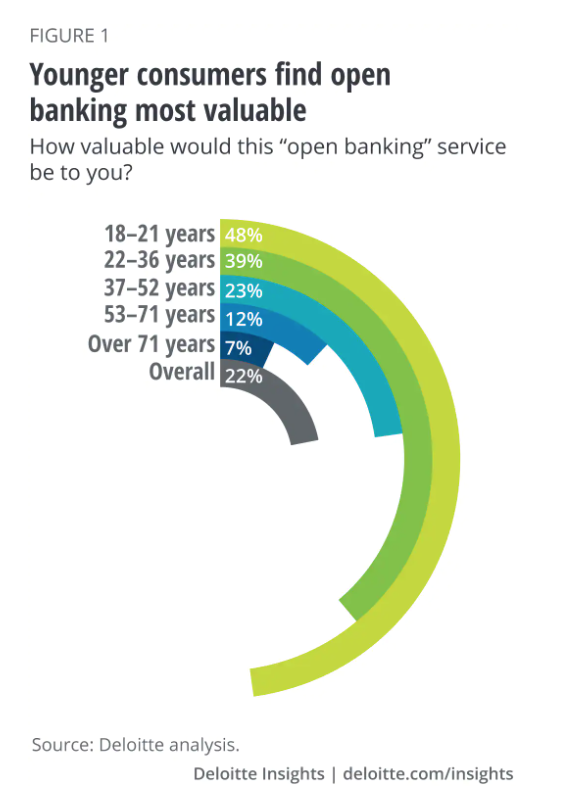 Unlike in the UK and the European Union (EU) where open banking adoption is mandated by law, US regulators have taken a more hands-off approach by issuing non-binding guidelines and allowing industry stakeholders including financial institutions and tech companies to drive the impetus for open banking themselves.

For example, Wells Fargo entered a data exchange agreement with Intuit in 2017 to expand functionality for their shared customers. Tech company Envestnet Yodle offers financial data APIs that provide access to the majority of US financial institutions, while Plaid, one of the biggest names in the US open banking space, delivers an API platform for third-party providers to connect to financial institutions for account access and authentication.

Founded in 2012, Plaid originally had plans to develop a personal finance management app but later shifted its focus to API-driven bank account connectivity. Today, the startup provides a technology platform that allows applications to connect with users’ bank accounts, enabling consumers to share their financial information, including linking bank accounts and monitoring investments with thousands of apps such as Venmo, Robinhood and Coinbase.

Plaid has experienced rapid growth over the past years, raising over US$300 million from prominent venture capital (VC) firms and ultimately agreeing to be acquired by Visa for US$5.3 billion in January 2020. Visa later abandoned the deal after opposition by the US Department of Justice due to data privacy and antitrust risks. Plaid is now valued at an estimated US$15 billion.

Brigit is another fintech startup that’s surfing on the open banking movement. The company offers an app that analyzes users’ financial health in real time and provides them with access to tools to help them make more responsible financial decisions. Brigit is able to get real time visibility by connecting to users’ bank accounts via Plaid’s API. The startup raised a US$31 million Series A funding round in January. It was valued at about US$150 million back in 2019.

Despite considerable development in the US open banking landscape, the sector remains in its early stages and several challenges are hampering customer adoption, the FT Partners report says.

Although younger generations are less concerned than other generations for the most part, many consumers of all ages have reservations regarding privacy and security.

US respondents of the Deloitte study called out potential theft of identity (69%) and misuse of data (60%) as the aspects of open banking that most concerned them.

Tack of trust in the institution receiving the data, and concerns that the data will be misused, shared with others without permission, or lost/hacked, were cited as the main reasons why most customers do not want their banks to share their information with third parties. About one-half of respondents hesitant to have their data shared said these reasons were their main concerns with open banking. 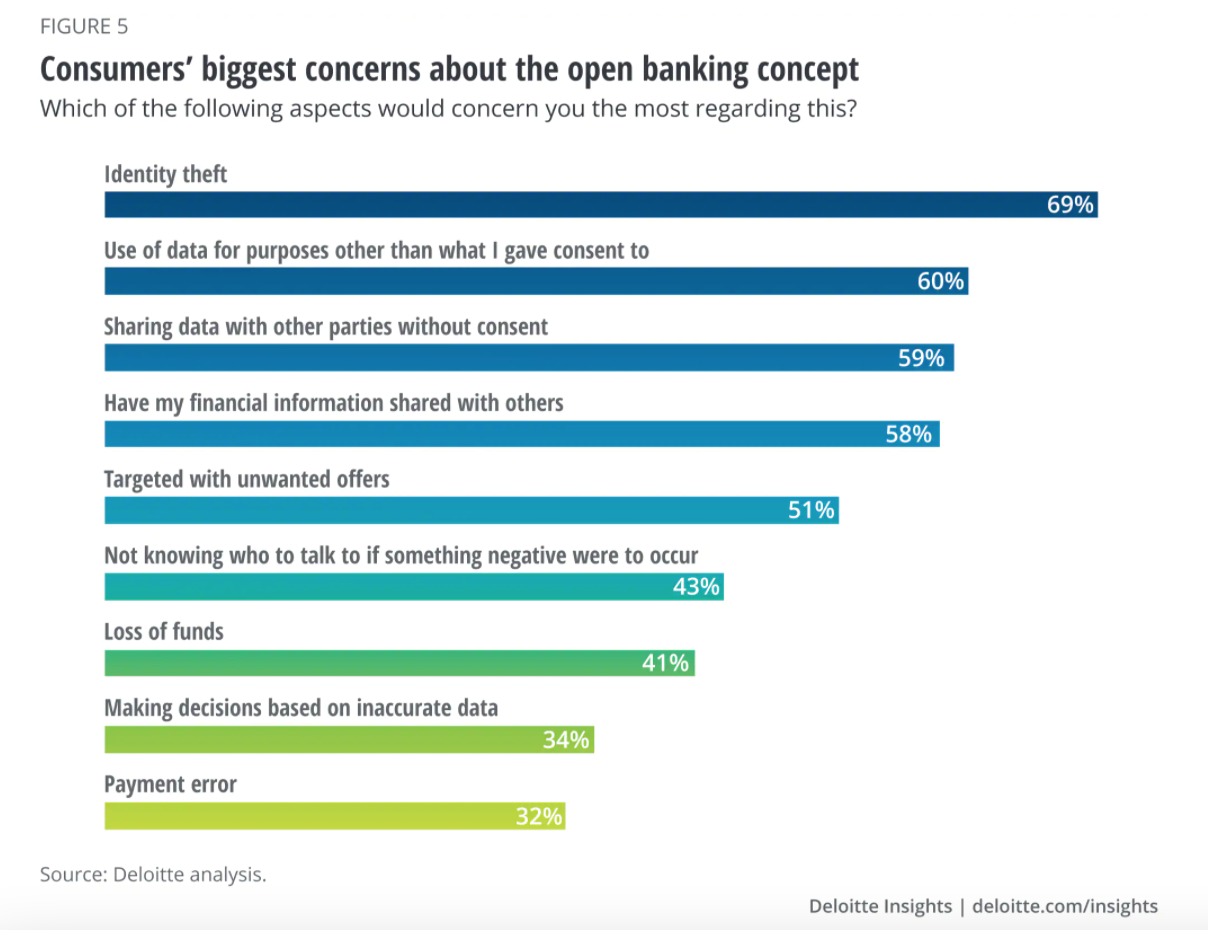 The number of financial related APIs has increased tremendously over the past years, growing at a compound annual growth rate of 35% between 2010 and 2019, the FT Partners report says. In 2019, there were some 4,000 financial services APIs available around the world. 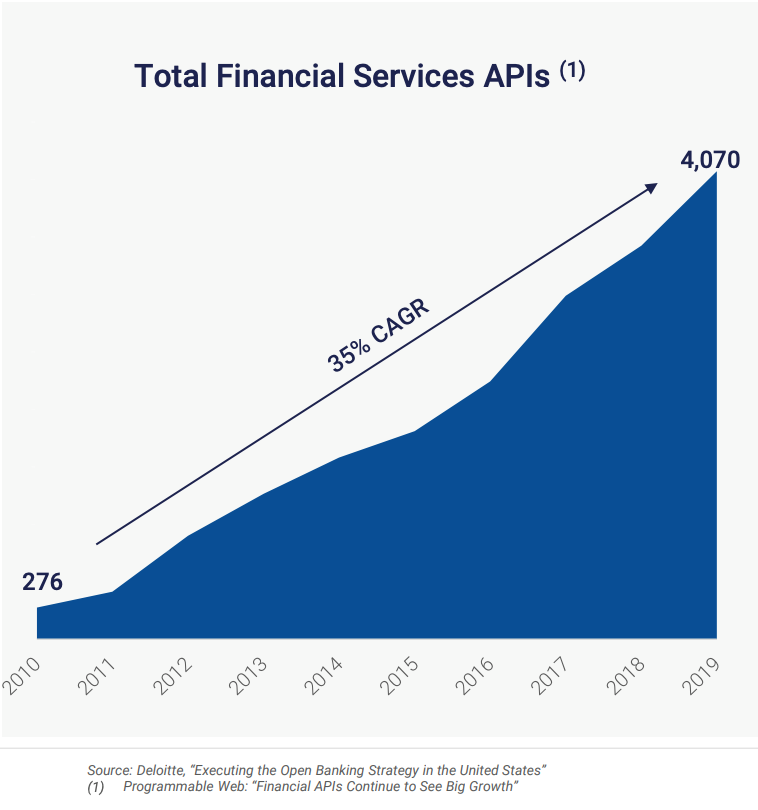 open banking in the US

Databricks Secures US$1.6 Billion in Series H Fundraise at US$38 Billion Valuation