There are 56 fintech billionaires around the world who combine a total net worth of US$327.7 billion, data curated by Finextra based on Forbes’ 2021 World’s Billionaires list show. These represent some of the world’s biggest and most successful fintech companies in the world including Ant Group, PayPal, Stripe and Klarna. They are also world renowned fintech investors and the founders of leading firms such as Bloomberg and Thomson Reuters.

US leads in fintech billionaire count

US fintech billionaires are worth a combined US$162.1 billion and represent industries including financial media and information, payment, cryptocurrency, blockchain, brokerage and trading, and digital banking.

They include the three co-founders of financial information and media firm Bloomberg Michael Bloomberg (worth US$59 billion), Charles Zegar (US$2.6 billion), and Duncan MacMillan (US$1.5 billion), eBay founder Pierre Omidyar (US$21.4 billion), Square founder Jack Dorsey (US$12.5) and co-founder Jim McKelvey (US$3.5 billion), and Coinbase CEO Brian Armstrong (US$6.5 billion) and founder Fred Ehrsam (US$1.9 billion).

Fintech billionaires around the world 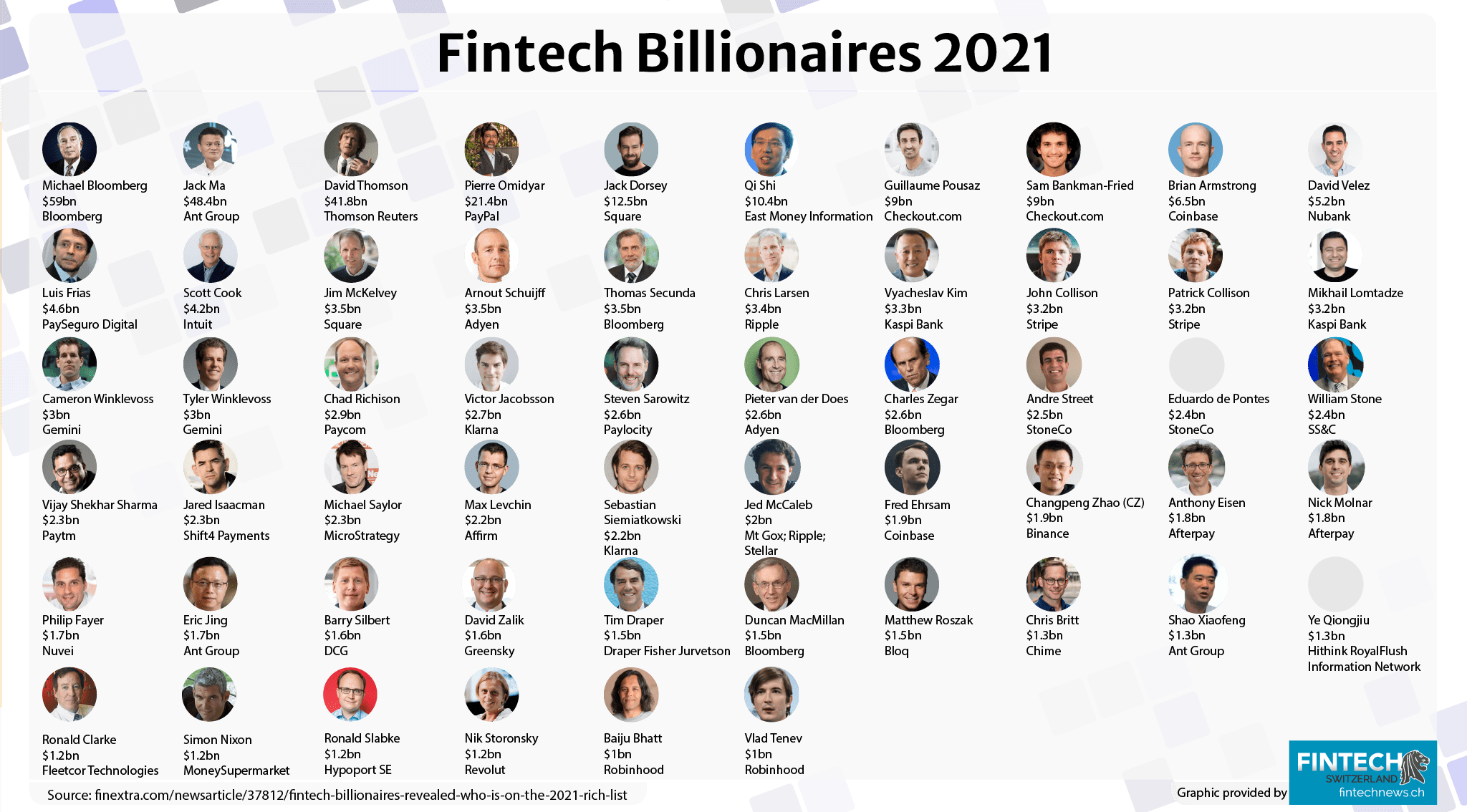 After the US, China has the second highest number of fintech billionaires at 6 for a combined total net worth of US$65 billion.

Three of them are affiliated with Ant Group, the fintech spinoff of China’s e-commerce giant Alibaba and the world’s most valuable fintech company at US$220 billion. They are Jack Ma (US$48.4 billion), Alibaba’s co-founder, Eric Jing (US$1.7 billion), Ant Group’s executive chairman, and Shao Xiaofeng (US$1.3 billion), a major shareholder of Ant Group and former chief risk officer at Alibaba.

Brazil has the third highest number of fintech billionaires at three who combine a total net worth of US$9.5 billion. They are Andre Street (US$2.5 billion) and Eduardo de Pontes (US$2.4 billion), the co-founders of StoneCo, a Nasdaq-listed cloud-based online payment processor, and Luis Frias (US$4.6 billion), the chairman of PagSeguro Digital, a New York Stock Exchange (NYSE)-listed payment company.

The UK, Sweden, the Netherlands, Ireland, Canada, and Australia all have two fintech billionaires each, who oftentimes are the two co-founders of a successful company.

In Ireland, they are John Collison (IUS$3.2 billion) and Patrick Collison (US$3.2 billion), the co-founders of Stripe, the world’s most valuable VC-backed private company at US$95 billion.

In Sweden, they are Victor Jacobsson (US$2.7 billion) and Sebastian Siemiatkowski (US$2.2 billion), the co-founders of Klarna, Europe’s most valuable fintech company at US$31 billion.

In the Netherlands, they are Arnout Schuijff (US$3.5 billion) and Pieter van der Does (US$2.6 billion), the co-founders of payment processing company Adyen.

This article first appeard on fintechnews.ch